This independent TEDx event is operated under license from TED.

For four years, TEDxFIU has captivated the FIU community. From firsthand accounts of inspiring stories to conversations about cutting edge research and finding solutions to global problems, TEDxFIU speakers show the world what it means to be Worlds Ahead. 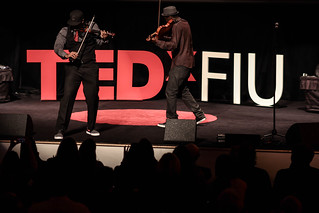 With a new year underway and the fifth annual TEDxFIU event around the corner, the TEDxFIU 2016 speaker applications are now open. A new, separate application for those who wish to perform at TEDxFIU 2016 is also available. The application deadline is April 29.

You can submit applications for both being a speaker or a performer, but if selected you will most likely only be selected for one, unless the performance is relevant to the speech.

TEDxFIU audience members often say they leave their seats in awe and admiration after hearing the talks. But TEDxFIU speakers also leave the event with a lot more than a check mark on their bucket lists.

Last November on the TEDxFIU stage, Kayser shared how she became a musician to connect with her brother, who was diagnosed on the autism spectrum.

Kayser says her TEDxFIU experience motivates her to keep using her voice to shed light on autism.

“I’ve literally been in thousands of talks, but a talk like this is different,” TEDxFIU 2015 Speaker Todd Crowl, director of FIU’s Southeast Environmental Research Center and co-founder of FIU’s Sea Level Solutions Center says. “Here you start talking, and they tell you ‘no, no, no, you’re doing it wrong.’ The people really know what they’re doing and they put so much effort into this.”

If you’re ready to embrace the challenge, celebrate TEDxFIU’s fifth anniversary and become a speaker, apply on the TEDxFIU site.